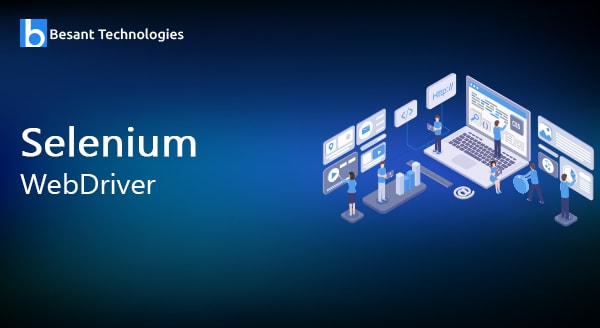 The Web Driver is one of the most powerful and popular tools in the Selenium toolkit. The WebDriver comes as an extended version of the RC Selenium with superfluous advantages and addresses many of its limitations. WebDriver extends its support to many newer browsers and platforms, unlike the Selenium IDE. WebDriver also does not require that the Selenium server be started before running the test scripts, unlike Selenium RC. The Selenium RC in aggregation with the WebDriver API is known as Selenium 2.0. Selenium has been developed to support dynamic web pages and Ajax calls. It also supports several drivers for the web-based mobile test.

Selenium WebDriver is a browser automation structure that accepts commands and sends them to a browser. It is implemented through a specific browser driver. Control the browser by communicating directly with it. The Selenium WebDriver supports Java, C #, PHP, Python, Perl and Ruby.

There are four components of the selenium webdriver architecture:

It is nothing more than Jar files, where the language in which we write our selenium box. This means that the language we use to write the script can be Java, C #, Ruby, Python, Perl.

JSON stands for JavaScript Object Notation. It is a lightweight data exchange format that helps us exchange data. JSON is used to transfer data between the client and the web server. A simple JSON file has a .json extension. The JSON protocol with cable sends data in the JSON format and the server first analyzes the data and then executes the data and, after that response, the server sends the client back to the JSON format.