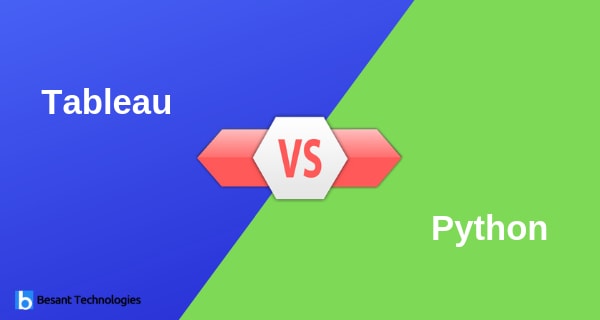 As a business analyst, here I explain how we can make use of Tableau and Python for the purposes of business intelligence.

Tableau is a rapidly growing data visualization tool widely used in the business intelligence industry. It’s regarded as the best solution to transform the unprocessed set of data into an easily comprehensible format. You can handle it without any technical skills or knowledge in coding.

As soon as you launch Tableau, you can make use of the built-in data connectors to get connected to any database.

You can extract the data easily and connect to the Tableau data engine i.e. Tableau Desktop. Data analyt and data engineer here deal with the data procured and convert them to visualizations. You can convert them to static files and share them with the user. These dashboards are viewed by the users through Tableau Reader. Collected data is published in the enterprise platform Tableau Server. Users anywhere can open these files even in their smartphones. Tableau Server supports collaboration and distribution as well as security model and automation.

Python has established itself as a dynamic programming language in many areas of software development worldwide.

Python is a dynamic, interpretive script programming language. Python was developed at the beginning of the 1990s by the Dutchman Guido van Rossum. Today, this language is being developed as an open-source project by many developers worldwide. for the further development of Python in the foreground.

Python language constructs also allow the selective implementation of the principles in the software development as code ReUse, KISS( Keep it short and- simple) and( Don’t repeat yourself), In particular, the improvement of ReUse concepts is an important topic in research into more effective software development. This led to research activities at universities around the world leading to the formulation of so-called patterns.

Python program code is transparently translated by an interpreter into an intermediate code, the so-called byte code, and then executed. Python interpreter C Python, developed in the programming language C, is available for all common operating systems such as Linux, Mac OS, Windows, and others. Therefore, programs developed in Python are platform-independent.

Many companies including Google have chosen the programming language Python as their in-house scripting language for the development of web applications. A powerful example of web applications is Google’s App Engine. Guido van Rossum has been working for Google since December 2005. In a lecture available on Youtube in 2008, he explains the topic of rapid development with Python on Google’s application platform. The standard solution for data persistence of Python applications is called ZODB, an object-oriented database often referred to as an object store. Even large organizations and companies like NASA or even the CIA use these powerful and secure web platforms.

In 2018, Python obtained a share of 22.8%, just taking the first place in Java which was content with 22.5%. The month before, Python was in second place with a share of 22.2%. Moreover, Python was the only language in the top 20 to have experienced significant growth (5.5%). The TIOBE index has just designated the Python language, winner of the programming language title of the year 2018. The TIOBE index, a bit like PyPL, is based on a formula that examines language research in search engines such as Google, Bing and Wikipedia. The formula measures the number of qualified engineers, courses and third-party suppliers in relation to a language.

With the Python package TabPy, you can carry out Python soft code on the Tabfly and exhibit outcomes in Tableau picturing, helping you to swiftly arrange cutting edge analytics applications. Excellent data visualization capabilities, powered by potent data science algorithms of TabPy gives a split approach. A great advantage of Python algorithms in Tableau is that it allows users to synchronize parameters and assess their effect on data analysis in real-time with every dashboard updates.

When you combine the capabilities of both Python and Tableau, immense powerful possibilities are there. You can use Python code within Tableau to create an interactive dashboard putting into service a time-series forecast. Or you can create Interactive user-input-based dashboard like Tableau using Python Plotly Dash. In the field of data science, integrating Tableau with Python can do wonders in any business.

If you learn how to assimilate Tableau and Python making use of the TabPy API, your chances of getting highly paid jobs in the lucrative Business Intelligence field will be high. Joining a relevant in the course in prominent IT institutions like Besant Technologies will enable you to become an expert in Business Intelligence.